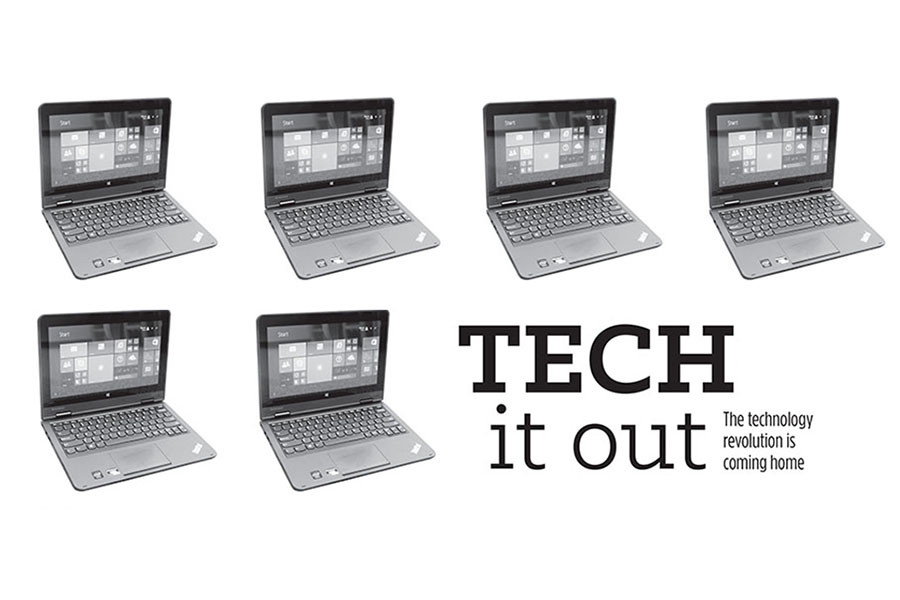 LISD integrates mobile technology into the classroom with laptop intiative

On the second floor, down the English hall, clusters of students sit in their desks facing each other, pecking away at small keys. They glance up occasionally, 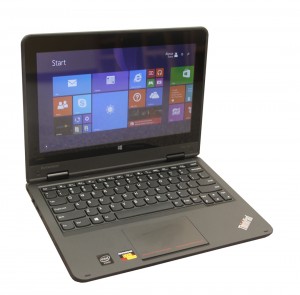 murmuring to each other and tapping at the small computer screens.

A year ago, Pam Bowmer’s Pre-AP English II class would have had to wait for a computer lab opening to create a newsletter about To Kill a Mockingbird. The students would have been forced to sit in low rows of computer desks, unable to work truly in a group setting. But thanks to a new endeavor by LISD, the district is transitioning to a new world, a mobile one where laptops are integrated into the classroom and curriculum.

The Leander Mobile Learning Initiative, or mLISD for short, is the district’s answer to aging computer equipment, a drastic cut in textbook funding, and preparing students to be successful in a digital world. As LISD looked at replacing outdated technology, they realized the funds could be better spent by taking a different approach.

“Instead of asking our teachers ‘What should we do with the money?’ we began asking ‘How do we want our classrooms to look?’ ” LISD Director of ITS/Decision Support Sarah Martinez said. “The 21st century classrooms we know are different from even the classes 10 years ago.”

Instead of replacing the schools’ desktops and keeping limited computer labs that had to be shared, the district wanted a more mobile solution. Dubbed mLISD, the initiative integrates technology into everyday use, anywhere. Initially still in the pilot phases, the district’s goal is to put laptops in the hands of every middle school and high school student and teacher over the next few years.

“The vision is to have ubiquitous access for students and teachers throughout the system,” Martinez said. “Not based on having cool technology in your hands, but having the functions that you need to gather, build, and share your knowledge and learning.”

The district invested in Lenovo Thinkpad laptops because of their durability, size and cost. Student laptops cost around $640 each while the teacher ones were $920 each. Both include three years of insurance, a charger and laptop case. The Lenovos are lightweight, touchscreen and can be turned into a tablet.

“They have done a lot of studies; it was a better price and a better machine,” technology facilitator, Scott Robertson said. “They like the fact that this can be used as a tablet that flips over, and the size, the durability add to it.”

As part of the current pilots, most middle school and high school teachers have laptops and have received training on how to integrate them into their classroom and curriculum. Three pilot schools, Canyon Ridge Middle School, Henry Middle School and Leander High School, distributed laptops this winter to their sixth and ninth graders.

This is the district’s first pilot to have devices go home with the students. At Canyon Ridge, 100 percent of the sixth graders are participating, 98 percent at Henry and about 90 percent of Leander High School’s freshmen are using the laptops. The district is studying these pilot schools to gage student engagement, classroom benefits and teacher feedback.

“It was amazing to me to see, to hear especially from our 1:1 ratio pilot campuses, how much difference it’s already making with the instruction and with their beliefs about students owning their own learning,” Martinez said. “With the types of efficiencies they’re gaining with Google classroom and with the ways they are able to differentiate instruction they had never been able to before.”

While Canyon Ridge, Henry and Leander are the pilot schools distributing to students, the other middle and high schools in the district received Lenovo laptops to be used on campus. Cedar Park, Vista Ridge, Vandegrift and Rouse all received 16 shared carts holding 32 laptops each. All the middle schools, except the pilots, have nine carts.

The carts have given additional freedom to teachers to incorporate the laptops into their curriculum, from students looking up current events in Speech and Debate to using different presentation technologies to learn Spanish vocabulary.

As part of the transition to the mobile community all of the teacher desktops from across the district will be removed next year and other equipment removed as it becomes irreplaceable or unusable. Within the next two years, all of the desktops in classrooms and most labs will be gone.

Meanwhile, if the pilots go well, the school board is expected to approve the continuation of the mLISD program. All sixth and ninth graders around the district will have the opportunity to lease a laptop. The pilot schools will expand from sixth to 11th grade. Students will pay a $35 fee per semester for insurance. If a student is on free and reduced lunch they will only have to pay half the fee. All participants will take home the laptops each night and must return to school with them.

“I think most of our students will understand and appreciate the privilege that they are given to have use of that,” Bowmer said. “You are always going to have one or two that aren’t going to appreciate it, but when [my sophomores] were all opening them up they were ‘Aw’ing excitedly and they were mad because they’re aren’t going to get one.”

Students who don’t want to lease a laptop have two other choices. They can purchase the device through a partner of the district that will offer the same model at the same cost, or they can simply bring their own device like a MacBook Air or an HP laptop. 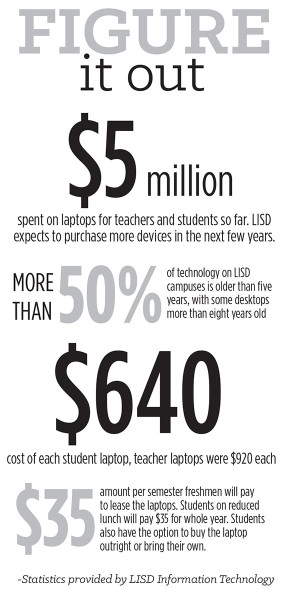 “The goal is though, to try to maintain the best working equipment as we can on the campuses so that all the students have continued to grow and have access to what they need, so that we don’t go backwards while we’re ramping up for full deployment,” Martinez said.

Executive Director of Information Technology’s Scott Monroe estimates the total cost of the four-year project to be around $23.5 million, which includes the laptop integration in secondary schools and refreshing technology at the elementary level. Currently, the district has $21.5 million funded and expects to fund the additional needed money during the 2017-18 school year.

About 95 percent of the costs will go to equipment with three percent dedicated to repairs and replacements and two percent to support staff funding.

In the spring of 2014, the school board approved the sale of existing bonds to fund technology capital needs. Approximately $17.8 million was made available for capital replacement which includes computers, projectors, servers, Wi-Fi networks and other technology needs. About 70 percent of the project is funded from that 2007 bond money. The remaining 30 percent will be split between the instructional materials allotment and revenue from the student insurance and maintenance fee.

“So basically we are in a situation where we have very old equipment out at the campuses that need to be replaced the district,” Martinez said. “The board of trustees back last spring granted, allocated funds for the replacement of some of that technology basically they gave us about two years of replacement that should have happened the two previous years.”

Currently, the district has spent around $4 million for the student laptops and $1 million on the teacher versions. At this time, 9,254 have been purchased for students and 1,494 for teachers. If the school board approves of mLISD’s continuation, the district will continue purchasing laptops with a portion of the capital replacement funds. The plan is to provide devices to each incoming class at the middle and high school level, eventually having laptops in the hands of every high school and middle school student.

The laptops provide the schools with much needed new technology. The desktops were meant to be replaced every five years and most of the campuses’ Photo by Julia Gwin
technology is eight or nine years old. With $1 million spent annually on desktop repairs and maintenance, and a 75 percent loss in textbook funding a few years ago, the district believes that mLISD will help save some money in the long run.

While textbooks are not going away completely, it’s likely the district will utilize the mobile devices more for online textbooks and slowly reduce textbook buying.

“Certainly we see the writing on the wall, all of the learning content that is going on and being published right now in digital format,” Martinez said. “We believe that desktops are going away and we want to be prepared to be able to get choices to spend the money we have available for materials.”

For additional questions about the laptop initiative, please see our FAQs. 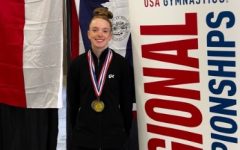 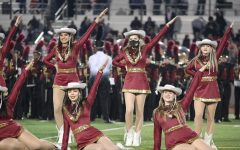 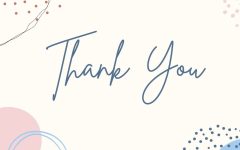 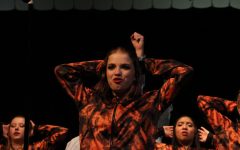 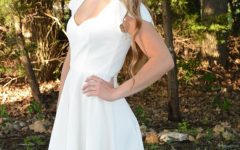 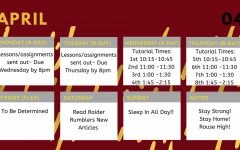 A message to our readers 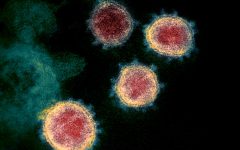 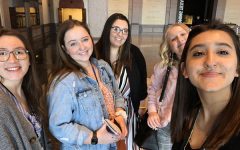 The COOLest week of the year