Lurking in your water, air, and soil. Widespread substances are thought to cause cancer 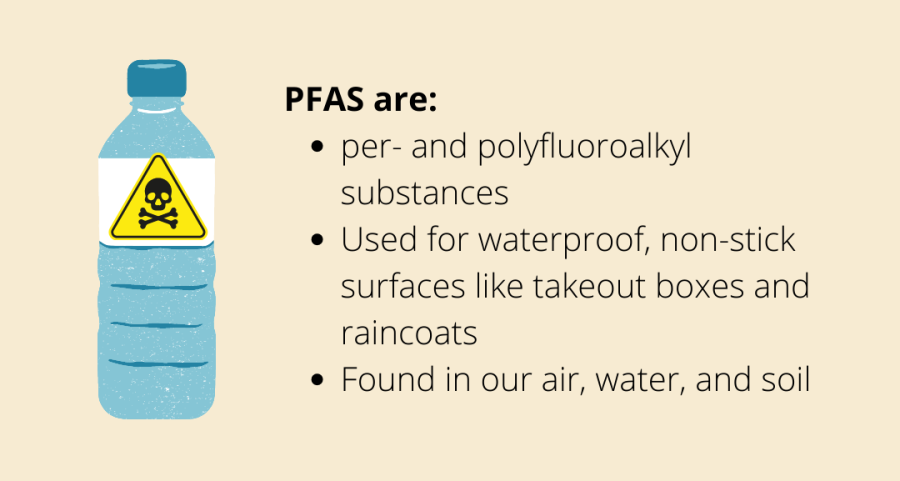 Toxic substances are flowing through our oceans and streams straight into our drinking water. They are cruising on gusts of wind right into our lungs. They are even thought to be running through most Americans’ bloodstreams. And unfortunately, based on expert predictions, these substances, which are called per- and polyfluoroalkyl substances (PFAS), are here to stay.

PFAS are commonly used to create non-stick and waterproof surfaces for products ranging from dental floss to raincoats to even pizza boxes. These chemicals have been linked with various ailments, including thyroid disease, low birth weight and cancer. PFAS have a composition that makes them (in the words of the New York Times) ‘practically unbreakable’ – hence the nickname ‘’forever chemicals.”

“I believe that persistent chemicals are an issue that should be addressed through scientific intervention,” AP Environmental Science (APES) student and senior Darian Boyd said. “But the primary way we should deal with this is through commercial regulation, not scientific.”

Other students agree with Boyd that while there are some things scientists can do to combat PFAS, government officials can change the situation more holistically.

“There are things scientists can do about this situation, such as finding a more sustainable option for PFAS, but the main power lies in the hands of the government,” senior Sai Sriya Duggirala said. “Without their support the scientists can’t proceed with much of their findings and conclusions.”

APES teacher Alicia Blount-Wilson strives to educate her students about current events in the natural world, with units in her course over different areas relating to environment and human impacts, including one on pollution. Wilson believes that PFAS are definitely a concern, and that there are actions any person can take to help bring awareness to and help prevent their spread.

“[PFAS are] just something that we should be aware of and promote,” Blount-Wilson said. “[The general public] can participate in lobbying or activism to try to increase that awareness and make it more of a concern for politicians that would be able to put policies in place. That can lead to industries looking for alternate substances they can use in those products.”

Despite the gravity of the situation, many students knew nothing about PFAS until they were asked about them. When asked how they normally got important news outside of school, most cited platforms like TikTok and Instagram. Unfortunately, not everything one sees on social media can be trusted.

“There’s a lot of misinformation going around,” APES student and senior Abigail Boyles said. “A lot of the time, when something is said, [people] will genuinely believe it if it’s said by anyone with any amount of authority.”

PFAS have not been proven to cause any of the diseases they have been linked with, though such correlations have shown up in multiple studies.

“A phrase we have in science is that correlation doesn’t always equal causation,” Blount-Wilson said. “So it means we can’t always say for sure that, ‘A PFAS caused this.’. Unfortunately in our world and lives we are exposed to a lot of different carcinogens and other health concerns. So definitely just go on about your life. Just being aware of [the situation] is good.”

While there have been few advances in breaking down PFAS, there will be no end to the problem until a cure-all is found. Until that happens, students can use many different resources to stay up-to-date on the news (and vigilant against misinformation). According to Wilson, one trustworthy source is the U.S. Environmental Protection Agency (EPA), which releases many reports on environmental concerns like PFAS.