Advocating for What We Want 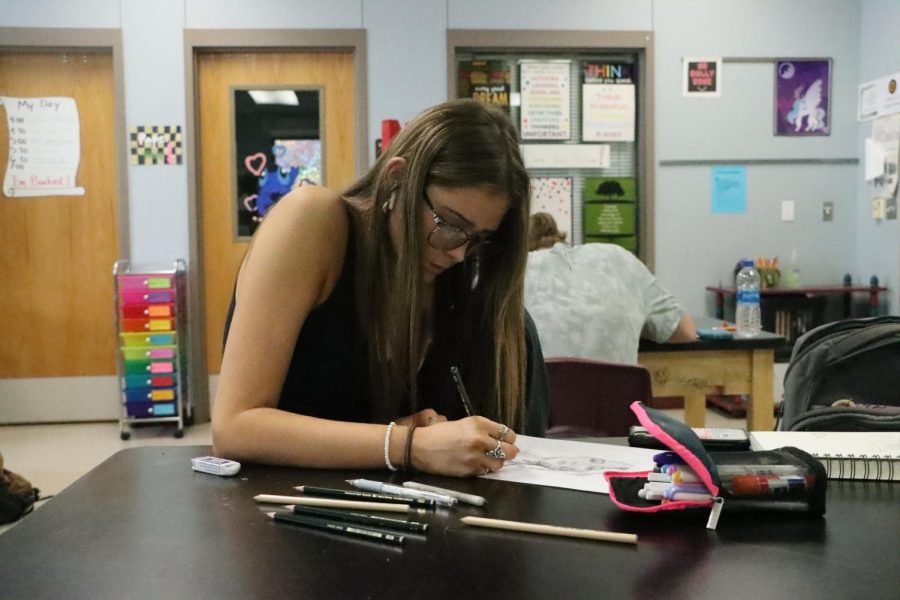 Brooklyn Ramsey, 10, is drawing for her art 1 class with Mrs. Acevedo.

After continuous discussion and debating on whether or not to keep advocate for the 2022-2023 school year, advisory has been implemented and new rules and procedures have been introduced to Rouse.

In past years, advocate allowed for students to get passes from teachers to go to whatever class they may need, whether it’s attending tutorials or getting some extra help on an assignment. With the new rules in place, advisory is now extended to a 35 minute time period, and students are only allowed to go to other classrooms on specific days, only when allowed by their teacher. The other days of advisory are used for club meetings or students are instructed to stay in their second or sixth period.

“I think I like it better than previous years because I was not good at telling people they can’t come in for advocate, and it got a little crazy,” science teacher Ryan Casey said. “So having this structure, I think it’s better. You get to know the kids in second and sixth period pretty well.”

The new advisory regulations only allow clubs to meet once a month. In addition, the clubs must meet on the days that are scheduled for clubs during advisory. Clubs that require more meetings than once a month must meet before or after school now.

“I don’t like it because advisory is cut very short so if you are only allowed to meet once a month then you only have 30 minutes,” junior Nia Page said. “I think we should have multiple days because you can’t address everything in one meeting.”

Some students are involved with multiple clubs. With the rule that clubs can meet once a month and on certain days of the week, some club meetings can fall on the same day.

“It’s difficult because a lot of fine arts programs have overlapping conflicts,” junior Ani Albin said. “It makes it so much more stressful since I feel like I have to choose one activity over the other.”

“I think it’s beneficial if you’re using it correctly,” Page said. “I feel like if I have something I can work on, I can be productive. I think I can organize my work and make certain things a priority.”

While adjusting to the new rules can be frustrating for students, many students are learning to adapt and do the best they can with the new regulations.

“I am trying to get my work done in my core classes since we do have that time,” Albin said. “I feel overwhelmed with work and I just have to keep going.”