I Pity the Bull 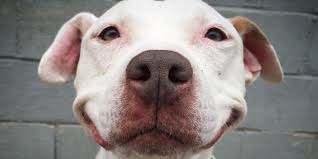 I Pity the Bull

People see a pug and lose their mind and must touch it’s little, adorable face. They see a golden retriever and need to stroke is soft fur or else their lives will never be complete. But, as soon as those same people lay their eyes on a pitbull, superstition replaces their ‘I love dogs more than I love myself’ attitude.

Why do they do this? There is no reason to be afraid of a domesticated pitbull. They deserve to be loved as much as any other dog.

If you’re lost on this subject, let me give you some insight.

Pitbulls are more prone to be violent because of their DNA. They are quicker to act in a situation where they feel threatened, than say a labrador. People have taken this information and made it into something bigger than it is, and the breed has acquired a “pitbulls are vicious” reputation.

Wherever you get your pitbull statistics from, make sure the source is reputable. Occurences of bites are public record, and therefore, are not the most reliable source. You are looking at numbers that have no explanation.

One thing to keep in mind is that there is always an underlying motive for a dog to a bite. They don’t do it just because “they’re a mean dog.”

Pain and fear play a role in this factor, and they are the two leading reasons for dog bites.

For example, there was a bite report filed in 2005 from a veterinary center in Charlotte, NC, after a technician reached into a dog’s mouth to find a source of bleeding. The dog was out cold. The ailing and heavily sedated dog went into convulsions as a seizure surfaced, and the technician’s hand’s skin was broken when the dog seized.

It is more than likely you would find bite reports like this one, with no further explanation clarifying the cause.

A recent commercial planned to be aired during the Super Bowl stated, “Do not adopt a Pit Bull because they are too dangerous.” It included many, under explained facts, and was an unfair, unkind and untrue campaign that could have cost many wonderful and innocent dogs their lives.

A dog’s breed does not determine how it behaves. Instead, a dog’s disposition comes from a result of poor ownership. That’s why it’s important that we have laws that punish abusive dog  owners, rather than punish abused animals.

Bad dog owners pose a bigger threat to society than pitbulls do. Pitbulls themselves are not the problem.

So how did pitbulls get such a terrible rap? It came about because of a biased stereotype that generalized and condemned an entire breed of dogs based on the actions of a few bad people.

It is possible that a pitbull could have been wrongly bred or intentionally trained to attack a person, but most of them typically love people.

In fact, pitbulls are one of the most affectionate, loyal, kind and dedicated companions one could have. However, to raise a balanced pit bull, one must keep the dog calm and submissive and never reward excitement. Doing this ensures the owner they will have a loving dog and  powerful protector.

So, the next time you’re out for a walk and you pass a pitbull with his owner, don’t be shy to approach the dog. Instead, after asking permission, you should pet him and let him know he’s a good boy.